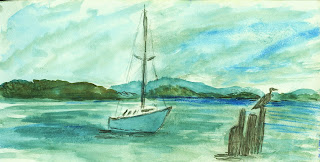 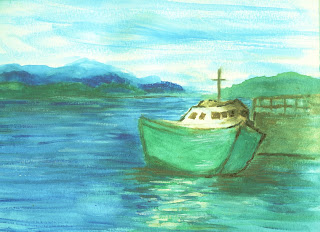 Paintings by Kevin Macneil Brown, watercolor and graphite on paper, 2013.

Posted by Kevin Mac neil Brown at 4:12 AM 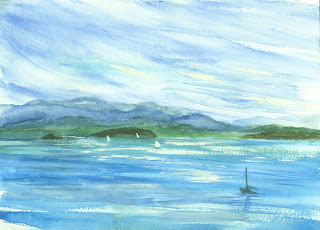 A Summer Storm On Lake Champlain, 1814 (excerpt from THE LAKE OF LIVING WATER ) 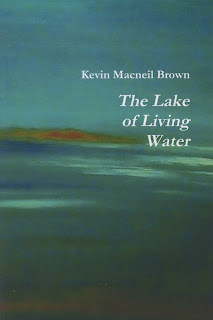 This section of the novel is narrated by a young boat builder named Jason Sanderling. He has come to the shores of Lake Champlain during the War of 1812, engaged to help build the American fleet.

I doubt that we finished the sloop that day, though it seems that we might have. That might be too perfect a fulfillment before all went so badly wrong. I do remember that it was a hot, heavy day on the shore to begin with, still air, silent water, shirts sticking to our skins even in the shade of the pines, even in the morning; wood shavings and dust from the saw-pits adhering to our sweaty necks and backs as we worked through the day.
By afternoon, white-gray thunderclouds rose above the lines of mountains to the west across the water. They gathered, departed, gathered again, towering higher into the reaches of sky than any clouds I’d ever before seen.
A welcome breeze arrived, a surprise, in mid afternoon. And then those towering clouds moved in from the opposite shore. They covered the sun, and the sky darkened. I remember shivering–and shivering hard–when, of a sudden, the temperature dropped.
And there she was again out there, dark tattered sail on the water, that small battered sloop pushed hard by the fearsome winds on the broad lake. The sky growing even darker. The little vessel seeming to fly toward us, but a rough, tumbling sort of flight, rising on wave, falling into trough, rising, falling again, all this distant and in the eerie daytime darkness of the gathering, oncoming storm.
“God. It will be a miracle if she makes the shore…” Peaslee said quietly to me, just before the rain reached across the shoreline and found us.
That rain fell of a sudden now, in gray sheets, making a sound that was between hissing and roaring. The wall of gray soon obscured that bobbing, twisting boat out there, her rising and falling mast and sails. I said a private prayer for the deliverance of those poor souls on the water, at the mercy of that big lake and the fearsome power of summer storm. Someone called out and pointed across the water toward the curve of shore past the headland–the Cedar Cove lighthouse had been lit. I caught but one quick glimpse of that pale beacon before it, too, was swallowed in thick gray gloom. Now the rain turned to falling ice, hail the size of grapeshot. Battered by it as we ran to the sheds, holding our hats tight against the onslaught, we sought, at last, our safety. Safe inside, we were to watch and listen as, for some two hours, hail and hard rain continued to beat upon the skin of the dark, churning water, thunder rocked the sky and mountains, lightning flashed in the firmament, and the strong wind soughed in the moving treetops.
It was a young fellow from Bennington--his name I never knew-- who first noticed, then spoke, the fact that Cowper was not among our company, and that he had perhaps been somehow caught in the storm.
By early evening the fierce weather had abated, and a copper-colored calm took over the air. I walked with down to the water’s edge. It was a shock to see how much the strong waves had changed the shape of our strand, such were their strength even in short duration. But our work was unharmed; small boats and sloop all sat safe in their cradles.
It was keen-eyed who noticed the floating spar at water’s edge some yards away. Looking to where he drew my attention, I saw also the twisted and frayed hemp line that rode like a flayed snake on the water.
We walked together toward these storm-tossed objects, and in that calm, yellowed atmosphere, something huge broke the water’s skin–the humped back of a giant lake sturgeon, the big fish as huge and ponderous, I thought to myself, as the passage of time itself, but somehow graceful, moving in its familiar watery element.
The fish disappeared beneath the water. and I walked the shoreline.
Against the rocks at the end of our small peninsula, at the edge of the creek’s mouth, sat a shape, a larger darkness than the rocks along the shore. Broken up as it was, it took a moment to recognize the vessel.
“Oh, Jesus” I said, “It’s that negro sloop. She’s in pieces.”


I remember the horrible moment when we came close, when we first saw that fallen mast, the tangled lines, the twisted, tortured sail laid like a dark blanket over the motionless bodies, and reaching from beneath that heavy, dirty canvas, a hand, frozen at the moment of grasping.

from THE LAKE OF LIVING WATER, by Kevin Macneil Brown. 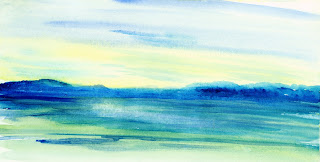