Running Along the Shores of an Inland Sea 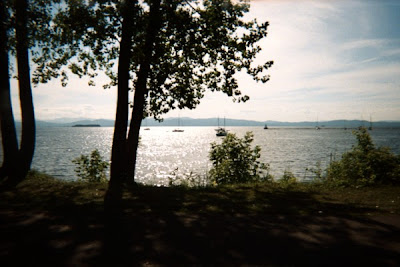 RUNNING ALONG THE SHORES OF AN INLAND SEA

This video combines some of my visual art meditations and explorations of Lake Champlain with a soundwork composition from my 2006 project BETWEEN WATERS.

The music was made with guitar, steel guitar, voice, and what I call sound smear: digital and analog audio processing. The text for the spoken layer is extracted from various journal entries from my trips to the lake and shoreline.

My experience of the lake has led me to a perception of shifting strata: water, land, sky, light, shadow; the powerful persistence of the past arising to fill a present moment.

(Here is the text of the spoken word layer, taken from my lake journals:

Approaching the water, bands of soft green, dark blue ( warm and cold , deep and shoal juxtaposed visibly). The ferry - EVANS WADHAM WOLCOTT- pulls out silently, with barely perceptible motion, out past sparkling boats inside the stone breakwater. August sun is low and mellow. Across the green Mountains a line of clouds, like smoking volcanos beneath clear blue sky.

***
Sipping a brash Speeder and Earl's coffee, I feel something run from soul to synapse-- An idea that's been brewing long inside me rises, whole.
It's about the deep need, to feel and learn and KNOW the wholeness of a place; the levels of truth and story and history and geology and war and peace and land-form and bird migrations that, once sensed and held in the heart, bring that deep and profound wholeness.. .
So by way of all this ---like shapes of mountains and forests, a structure for a narrative begins to be revealed, in sections (core?) (skeleton?) ( island and Bay?).
-------------------
Find the deep balm that heals the death and violence of blood and battles on these waters (1776, 1814, earlier)... The truth --of form, of shape, of feel-- that land and waters reveal, endlessly, again and again.

CROSSING
describe birds, the seaplane landing on surface tension's glitter, boats...sense of journey..black iron ore beaches on NY side I run on

BLOOD AND WATER
1776,1813, Indian battles before written history,
the skeletons dug up this year in old North End--(soldiers of 1812 war)