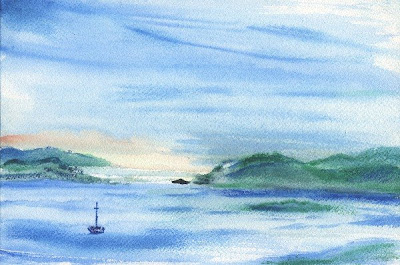 Osprey, strong and swift
to delve....

( reaching under,
pulling out and up...

Cedar flute
clamshell holding smoldering wood
sharp knife worn around the neck
(these the things thought to be carried by an Abenaki hunter)
Winooski intervale and just above-- railroad tracks you walked on, the river widening out below, beginning a meander, newly fecund on the way to the big lake-- marks early settlements of original people of
DAWN LAND
SALMON HOLE

ODZIHOZO ( the one who made himself)
made the vein-like tracings of all the world's waterways
web of rivers, ponds, lakes in the NW country
his ultimate creation was the big lake he rested upon, in the form of a ROCK above
WATER
still there, looming, in fog or ice or clear sailing....
...made by the one who made himself- -who rests satisfied, at peace, with a view for all time of the edge of his world.